The how, what, and why of making smaller, safer, more performant containers.

If you're like many deveopers first getting into Docker, containers, and cloud-native architecture, you were really excited when you containerized you first app and got it working. Then you went to push it to a registry... and some annoyingly non-trivial amount of time later, the push process completed. "What took so long?" you ask, and you look at your images, only to find that your simple Hello World container weighs in at around 1GB. Oof.

As developers and DevOps pros have gotten more atuned to containers over the years, they find ways to optimize, rebuild, and harden those containers as they move to production. The process can be overly manual, but the core concepts of Container Best Practices haven't changed.

This tutorial introduces the basic concepts of what we mean by container slimming, and teaches you how to approach slimming your own containers to make them lighter, faster, and more secure.

What is Container Slimming?

What it's not: Container slimming is not the same as compressing containers. Compressing is done automatically via the container runtime, and is a process similar to zipping or creating a tarball of a file.

Simply making the container smaller is one of the benefits of slimming, but not the core objective. 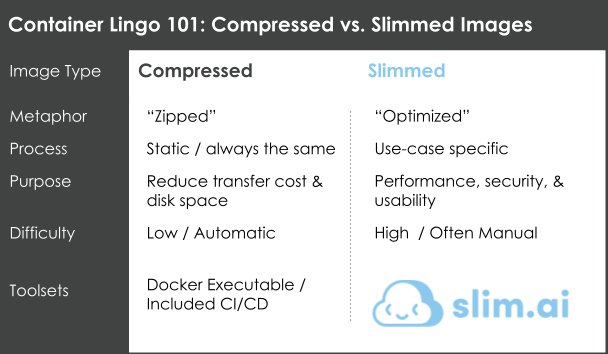 What it is: Container Slimming at the highest level can be thought of as "making your containerized application ready for production." It's an optimization process that can be done in one of many ways (or many of many ways) to achieve the following objectives:

Why Slim Your Containers?

Containers are often used like a local operating system or a virtual machine (VM). Developers work in containers while building and shipping apps, and expect certain tools, utilities, and libraries to be available when developing or debugging an application microservice. Developers often prefer larger, more fully featured container images like ubuntu:latest when developing apps.

But containers are not local environments nor VMs. They are meant to be purpose-built for the service that's running inside them. Once an application is ready to ship and put inside a container, the package managers, dev tools, and non-critical libraries can all be removed. This is the realm of slimming.

Simply shipping your dev container into production leaves you open to multiple known exploits and even more unknown ones (i.e., Day 0 events). And a containers attack surface isn't just about vulnerabilities. There are tons of great container vulnerability scanners out there—Snyk, Grype, and Twistlock to name a few—but getting a long list of vulnerabilities won't make your application any safer. (And may even densensitize your org on critical vulnerabilities).

Attack surface is also the removal of access points to would-be attackers. This includes:

There's no "one size fits all" approach to these items, so being aware of them and removing or closing what you can is critical to your application security.

Smaller containers are simply faster to get from place A to place B in your cloud infrastructure. While storage costs are fairly minimal ("storage is cheap these days" as our infra friends tell us), developer time is perhaps the most precious resource available to modern software organizations. Large containers take longer to push, pull, scan, verify, and inspect, and for dev teams working with dozens of containers at a time, those inefficiencies add up quickly.

Many solutions have arisen through the years for container slimming, all with varying levels of adoption and varying trade-offs developers and ops teams need to make to ensure a productive developer experience while reducing the risk of bloated, vulnerable containers being shipped to production.

Our container optimization workflow, which you can access when you make a free account on the Slim Developer Platform, takes you step by step through the process of optimizing a container that you can download for use right away.

With access to the world’s largest public registries, we're confident you'll be able to find the right container image for your project.

Powered by the core SlimToolkit engine, but with additional features like vulnerability scanning, a diff tool for seeing changes, and an easier to use interface, right now is your chance to try the full Slim platform for free!

Not surprisingly, our own open-source project is a favorite here at Slim. DockerSlim (now SlimToolkit), created by Slim co-founder Kyle "Q" Quest in 2016, seeks to automatically detect what's needed by the application in the container, and rebuilds a functionally equivalent "slim" version of that container to use in production. In doing so, it produces AppArmor and SecComp profiles along with a trove of additional metadata.

SlimToolkit users praise it for its results—often creating containers that are 30x smaller and with very few vulnerabilities left inside—and that it can be automated in a CI pipeline. While SlimToolkit works well for common web and API frameworks (the NodeJS family, Python, Rails), some more complex use cases (complex Java containers; data science containers) can require some tinkering.

Try SlimToolkit on your container project.

There are also a number of other approaches to slimming containers. These are some of the most common alternatives out there today:

Container experts can simply use clever Dockerfiles or build containers by hand using the FROM scratch base image, hand-tuning each and every dependency in their container tightly. Pros: Lots of oversight and customization. DevOps pros become experts over their own infrastructure. Cons: Just about everything else: It's incredibly labor intensive to build and maintain. Updates are a pain. And doing this can create a culture of "tribal knowledge" in an organization, where a select few individuals are the only ones who know how to make changes to a container. Think "Brett" from The Phoenix Project.

The "quickest" way to slim a container is simply to use a base image built from the popular Alpine Linux project. Many of the popular images have an :alpine variant (or several) that can be used as base images. Pros: It's often a one line code change that reduce image size significantly. Alpine is built with containers in mind. Cons: Notoriously, Alpine uses a different version (musl) of the libc library than most developers are used to (glibc), occasionally causing hard-to-debug, low-level errors. DNS errors also occur frequently and can be hard to triage. Its package manager (apk) is less familiar than apt and the Alpine community is smaller than comparable Linux distros like Debian or Ubuntu.

This process, developed and supported by the Docker Community, essentially creates two Docker images in a single Dockerfile. The first is often called the builder image and can server as a development container. It builds all the necessary packages, binaries, and file systems needed to create a successful container. The second set of instructions creates a new image FROM scratch—that is, an empty container shell— and copies only what's necessary from the builder image to that empty shell. Pros: In theory, you have a minimal container with nothing extra, and your build times are faster thanks to Docker's layer caching system. Cons: The challenge with this approach is often knowing what to copy into the new image: Copy too much, and you're carrying extra bloat and potential vulnerabilities; copy too little and you might miss core pieces of the operating system.

While this concept goes back almost as far as Docker, a recent push from the CNCF and companies like Google, Heroku, and VMWare are breathing new energy into this approach. Cloud-Native Buildpacks (CNB for short) seek to understand the kind of application or microservice you want to containerize, and build an optimized, performant container around that application. Pros: There are multiple flavors of CNB builders and a strong community behind the project. Cons: However, like any automated technique, there's a bit of a learning curve to debugging builds, and highly specialized applications may not work "out of the box."

Developed at Google, Distroless is an attempt to make FROM scratch an easy and viable alternative by packaging static binaries and dependencies at build time with nothing extra. You get small, production-ready images with only the dependencies that you need in them. Pros: Renewed efforts from the ko and apko projects have given this approach new life. Cons: While examples exist for Node and Python and a specific Distroless tool (jib) exists for Java, the approach works best for backend languages like Go and Rust, where statically compiled binaries are easy to build, manage, and debug.

How can I get started with container slimming?

Knowing your images is the first part. You can get a free account on the Slim Developer Platform to get analysis and insights on your containers, no matter how you build or slim them. Our platform provides an easy web UI for discovering and finding containers.

Second, join the Slim.AI Discord, where you'll find other container slimming enthusiasts of all experience levels. It's a safe and friendly place where you can ask questions, get advice, and share tips.